New research undertaken in the UK has found the most common worst DIY mistakes made by Britons, such as electrocuting themselves and breaking doors & door frames. What’s more, one-third of British homeowners admitted to having had to visit A&E due to attempting jobs around the house themselves that went wrong.

The team at professional service marketplace www.bidvine.com polled over 2,200 British home-owners, all of whom were over the age of 18, to find out more about attitudes towards DIY in the UK.

Initially, it was found that three-fifths of Britons (62%) have had an accident of sorts while doing DIY in their own home. When asked to state the worst DIY mistakes that had occurred while they were trying to improve their home, the following emerging as the most common: 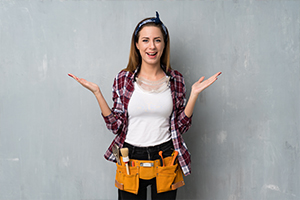 When asked if they had ever had to visit A&E because of DIY jobs they had attempted, more than one-third of those who have had an accident (34%) said they had.

The garden (32%) emerged to be the place that Britons were most comfortable attempting DIY, followed by the bedroom (25%) and the living room (13%).

The bathroom (3%) and kitchen (6%) were found to be the rooms Britons are least comfortable attempting DIY.

When asked how much they usually budget for a DIY project, the average answer was found to be £200, although 89% of respondents admitted to ‘never’ or ‘hardly ever’ sticking to this budget.

“Doing a job in your home by yourself can be incredibly satisfying, especially when you keep the costs low and the results are done to a professional standard, or thereabouts. However, it can also be a complete disaster and potentially incredibly dangerous. If you have something on your DIY list that relates to electrics, it’s recommended that you find a qualified professional. It’s safer, can prevent a trip to the hospital and could actually be cheaper in the long run. Sometimes it really is best to let the professionals do their job.”