Barratt Homes has awarded five pupils who are considered to be ‘rising stars’ at a primary school in Nuneaton, to celebrate its recent ‘five-star’ accreditation from the Home Builders Federation (HBF) annual customer satisfaction survey.

The Rising Star award winners and Saxon Meadows Sales Adviser, Juelee Taylor This is the tenth year in a row that Barratt Homes has received the top rating and to mark its continued success, the housebuilder awarded five ‘star’ pupils at Camp Hill Primary School, which is near to its Saxon Meadows development on Queen Elizabeth Road.

The five celebrated students were chosen in categories such as ‘most hardworking pupil’, ‘most improved pupil’, ‘best mannered pupil’, ‘best friend’ and ‘star pupil’. The winners of the awards received an Argos voucher from the leading developer to celebrate their dedicated approach to school and to recognise them for being the ‘rising stars’ in their class.

The HBF survey asks all customers who have bought a new house whether they would recommend it to a friend and for Barratt Homes to be awarded five stars means that more than 90% of its customers are happy to recommend their property. 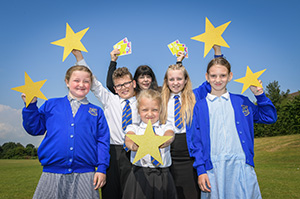 Helen Cartwright, a Teacher at Camp Hill Primary, said: “We are extremely pleased that Barratt Homes offered this fantastic opportunity to our school. It’s important to us to recognise the hard work of our pupils and we’re delighted to be able to award the ‘rising stars’ with some Argos vouchers they can treat themselves with. We’re very much looking forward to watching our pupils grow and recognising any other ‘rising stars’ that may emerge in the future!”

Philippa Stewart, Senior Sales Manager at Barratt Homes Mercia, said: “We’re delighted to have awarded ‘rising stars’ at Camp Hill Primary School. Whilst we acknowledge our success as a five-star housebuilder, we strive to reward the local community in which we build our homes and recognise talented individuals in the area. We wish the pupils at Camp Hill School every success with their future endeavours and I’m sure it won’t be the last time they are awarded for being ‘stars’.

Saxon Meadows currently has two and three bedroom homes for sale from £150,000. For more information about any of the Barratt Homes developments in the area, visit the website at www.barratthomes.co.uk or call the sales line on 033 355 84 79.