Britons are charging over £1,000 extra to sell a home with a well equipped kitchen

New research has found how much extra Britons are charging for furnishings in the sale of a home by room, well equipped kitchen (£1,080), bedroom goods (£965) and living room goods (£840), found to cost buyers the most. What’s more, one in seven homeowners have found rubbish when moving into a property, and one fifth have moved into a home they described as ‘dirty’.

The top reason given for selling a home with furniture included was found to be to ‘increase the value of the property’, whilst selling without was due to wanting to ‘avoid buying new furniture’ themselves.

The study was undertaken by the team behind premier windows furnishing company, www.thomas-sanderson.co.uk, in which more than 1,400 people over the age of 18 were polled. For the purpose of the study, all participants had sold a property in the past five years. 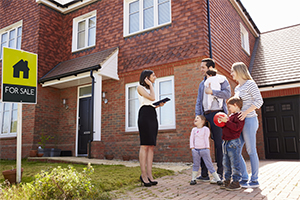 Initially, it was found that the majority of Britons who put their property on the market tended to sell them with furniture as part of the deal, with 52% admitting to this. A further 29% sold their home with a fitted kitchen (i.e. with white appliances included), and the remaining 19% sold the home completely empty.

Those that sold their home with furniture included were asked why they did this as opposed to selling it unfurnished, and the most common answers were ‘to increase the value of the property’ (34%), ‘not wanting the hassle of moving furniture out’ (26%) and ‘due to purchasing a property that’s already furnished’ (23%).

Relevant participants were asked to estimate how much they additionally charged for items left in the home, and the extra cost broken down per room was found to be

Of the respondents that sold their house as a furnished property, it was found that the items of furniture they would not sell with the home were beds (61%), televisions (58%) and coffee tables (55%).

What’s more, it was discovered that 22% of Britons who have bought an unfurnished property found unexpected items in there, mostly ‘old furniture’ (48%). Nearly a fifth of homeowners (19%) also revealed that the house that they bought was ‘dirty’ and had to be cleaned when moving in, and 15% even found rubbish in the house.

When asked about the strangest things they had found in a house when moving in, some of the more obscure responses were as follows:

Commenting on the results of the study, Richard Petrie, Marketing Director at www.thomas-sanderson.co.uk, said:

“There are a lot of choices to take into consideration when selling a home, and whether to do so furnished or unfurnished is one of those. Appliances and furniture can add value to a home, but will be fairly minimal compared to bigger changes that can be made.”