Majority of parents worry if children will adapt when moving home

The majority of parents said they were worried about how their child would adapt when moving home; with one in five parents saying they felt extremely worried - reveals new research from Purplebricks, the nation’s biggest estate agent.

Despite these concerns, almost one in four children (23 per cent) felt completely settled in less than one week, compared to just 16 per cent of parents.

The research of 1,001 British parents also revealed that:

·       The main concern parents had for their child when moving was disruption to general routine, with one third of parents highlighting this as a concern. This was closely followed by their child not liking their new surroundings (30 per cent) or not being able to sleep in their new bedroom (29 per cent).

·       One in four parents (25%) worried that the house move would lead to changes in their child’s behaviour.

To help provide support to families who are moving, Purplebricks, has today launched A Kid’s Guide to Moving House in collaboration with Diary of a Wimpy Kid and Puffin Books, to help children have a positive experience when moving home. 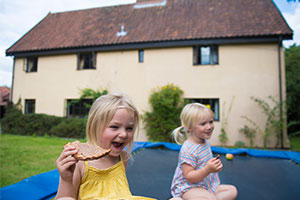 Available free to download here, A Kid’s Guide to Moving House contains practical insights and advice from psychologist Emma Kenny, as well as fun activities to help children prepare when moving home. Emma recommends that children should be involved in the moving process and encouraged to share any worries they have, as this can help alleviate their fears and make them feel more confident and positive about the move.

“Moving home can be an emotional time for families, especially for children,” says Emma Kenny. “It can be an exciting and happy time, but it can also be stressful and daunting – especially if children are changing schools, leaving friends behind or moving into a much bigger house, which could lead to changes in their behaviour. When I moved home two years ago, both my children attended viewings and the final decision to buy our current home was made by us as a family. I truly believe that this is why both my boys love our new home and settled in so quickly.”

Vic Darvey, CEO at Purplebricks explains, “As the UK’s leading estate agent, we want to help families through every step of their move to ensure it’s as seamless and enjoyable as possible. When moving home, so much focus goes into the actual sale of the property and the house itself. But what’s often overlooked is the emotional impact moving can have on a family. There may be excitement and happiness, but also nerves and anxiety, especially if it’s the first time they’ve moved or they’re relocating to a new area. Naturally all of these changes can be unsettling for children. Our Kids Guide to Moving House encourages children to share their thoughts and feelings about moving, and help them to feel excited about moving homes.”

Hannah Sidorjak, Head of Marketing at Puffin Books added, “Diary of a Wimpy Kid is a series known for being brilliantly funny and bringing lots of laughter to children around the world. By partnering with Purplebricks on their Kid’s Guide to Moving House we hope we can bring some Wimpy Kid style fun to the process and help younger members of the family get excited about their big move, something Greg encounters in the new Diary of a Wimpy Kid book- Wrecking Ball.”

The free Guide is available online and Purplebricks will be giving physical copies of the Guides to customers during property valuations.

The launch of the Guide coincides with the release of the latest Diary of a Wimpy Kid book Wrecking Ball in which Greg Heffley and his family experience the ups and downs of home renovation and planning to move home.

Adelaide relocated from London to Norfolk in the summer of 2019, with her husband and two young daughters, aged 5 and 3.

·       Adelaide and her husband were spurred on to move by the age of their two daughters; they thought that by moving when they were younger it would avoid having to hunt down two places at the same school, and that it might be harder to move when they were older as they would have stronger friendships.

·       Moving from city to country, Adelaide was anxious that their eldest daughter would find it too great a contrast; especially as her new school is very different in both size and culture.

·       The two daughters were calm throughout the move, but as the moved got closer, the eldest daughter grew an inkling that she would be further away from her best friend and her maternal grandparents; this came to light when she was tired or tearful. Adelaide saw this as an opportunity to talk about the topic of real friendships and relationships surviving distance.

·       Adelaide’s advice for other families is to focus on the positives of moving, talk to your children about the things they can do in the new house, and get them involved in the packing. “They helped us choose the toys and clothes to take to the charity shop, and they were keen to cut up the tape for the boxes for us. Almost three months on now and my daughter still compares her current and previous school, but she naturally looks for all of the positives of where she is now. I think we all feel as a family that moving has been a huge success.”

Further insights from the research showed:

·       30% of parents in Greater London were extremely worried about how their child would adapt when moving, compared to 15% in Wales and 10% in the North East